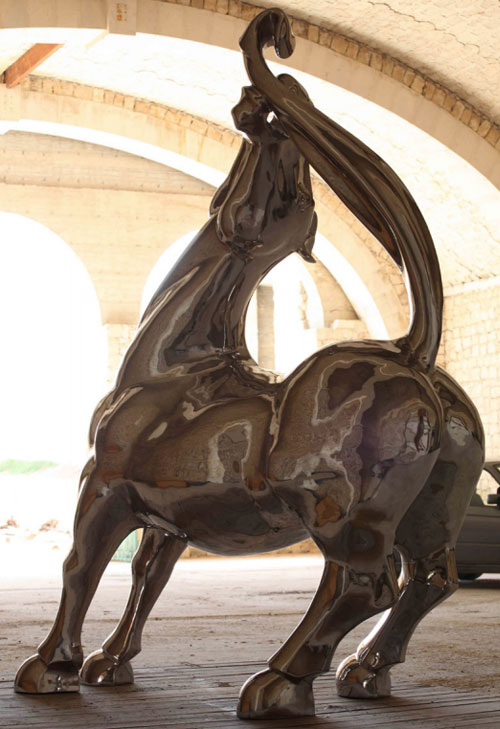 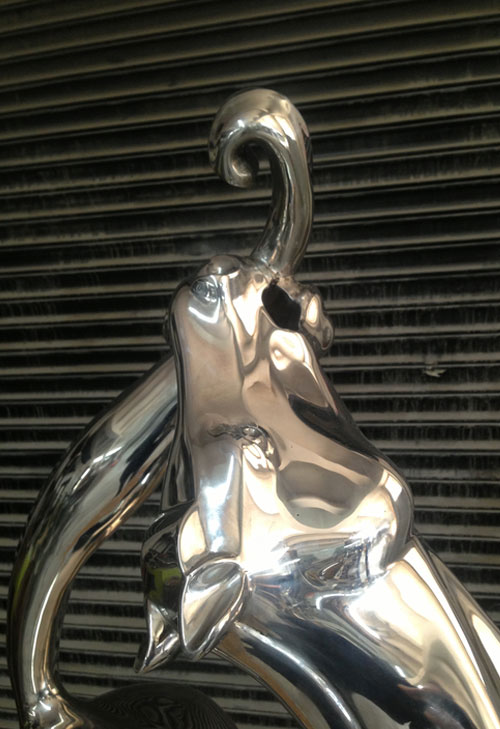 It was during the middle of the night on 15th December 1989 that Sicilian born, Arturo Di Modica, arrived on Wall Street with his 16ft Bronze Charging Bull on the back of a flatbed truck. He proceeded to drop the sculpture right outside the New York Stock Exchange with no prior permission from the authorities. The work was his gift to the American people and intended to inspire all whom came into contact with it to carry on fighting through the hard times with ‘strength and determination’ for a brighter future after Black Monday and the proceeding stock market crash. This late night stunt made front pages around the globe with Charging Bull going on become one of the world’s most iconic works of art, drawing millions of visitors each year.

However this was not the first time Di Modica had performed an unauthorized installation. On Valentines Day 1985 the artist loaded his monumental semi-abstract vision of the horse onto the back of his Ferrari 328 GTS and headed straight for the Lincoln Centre.

In order to appreciate the importance of Il Cavallo in the artistic journey of Arturo Di Modica, you must step back to 1960 when the young artist ran away from his native Sicily on the back of a steam train destined for Florence. His early years were characterized by an extreme struggle to get by, having to take a whole assortment of odd and bizarre jobs just to survive. During the 1960’s, Di Modica was almost exclusively focused on developing his abstraction. Unable to afford the local foundries, he resorted to forging his own tools and building his own foundry in his home studio in order to cast works. These early efforts culminated in 1968 with his first major solo show at the prestigious Villa Medici. Shortly after this, he was to have a fateful encounter with the British great, Henry Moore, who was preparing for his important 1972 Florentine exhibition. After the two began working alongside each other in the same Carrara studios, a whole new abstract style emerged from Di Modica. However by the early 70’s he had grown frustrated with the limitations of Florence for his career and decided to make his next big move - New York City, capital of the world’s art market.

Upon arriving in NYC, Di Modica began experimenting with balancing two very different materials within single works, such as his abstract stainless steel and Belgium marble sculptures. As well as contrasting sharp edges with smooth curves. All abstract. During these years through the New York social scene, he began meeting his first important patrons who began collecting his work. In 1977 he made his first big public debut when he arrived outside of the Rockefeller Centre and dropped sixty tones of his abstract marble works with no prior permission making front page of the NY Post.

In 1983, the first clear move in direction is seen within his body of work when he created an abstract depiction of a horse in stainless steel. The following year, the sculpture was put on exhibit within Trump Tower. One day Di Modica received a call from Ivanka Trump complaining that people could see the horses privates as they came out of the lift to which he replied “Ok don’t worry - I’m coming tomorrow with underwear for him”.

At the start of 1984, Di Modica began working on his Il Cavallo sculpture - a depiction of the horse biting its tail. The reason this work is so important within his body of art is because it marks a move towards a more figurative style and is the pre-cursor to his 1987-89 Charging Bull. Prior to this all known surviving works, and Di Modica often destroyed works he was not happy with, are abstract. Arriving during the day time with the sculpture covered in a red drape with the words ‘Be my valentine N.Y love AD’ painted onto the side. Immediately upon its installation it was a big hit with all whom came across. The work was quickly snapped up into a private collection with a second copy later being sold to the important Italian designer, Roberto Cavalli, who Di Modica was friends with from their joint days in Florence during the 60’s.

The success of the Lincoln Centre installation gave Di Modica the confidence to carry on developing this new semi-abstract direction. After Il Cavallo he spent the next 16-years developing this new stylized approach which were commercially his most successful works. After which in 2,000 he returned to a more abstract series of work with his Erotica editions. 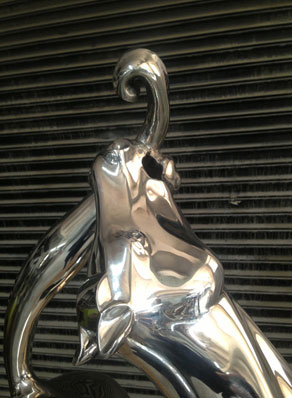